means Event A becomes Event B by means of time reversal. In this page “time reversed” means: the film of the event being played backwards. The event before the := always can exist physically with a reasonable chance of occurrence. If the reversed event after the := cannot exist or is very unlikely, the event is indicated by an arrow.

9) Somewhere in the void between the galaxies there is a large cloud of atoms. They are all of the same kind, H2 or C-60 or anything. Deep in the cloud there are 14 atoms in each others neighborhood, see the red dots 1 up to 14 in the first picture. Atom 10 emits one photon in unknown direction. As experienced by us, Outside Observers, a spherical superposition of photons (one for every distinguishable direction) spreads with light speed from the atom. It passes by the atoms 9, 8, 7, 6, 5, 13, 4 and 3, one after another without being absorbed, and finally arrives at atom 14. There the photon is absorbed, just before the sphere would have reached 2 and 1. The photon is observed, the wavefunction collapses.

The time reversed version of this course of events starts with a sphere of photon superpositions (through 14 and between the spheres of 2 and 3 in the picture) suddenly emerging in space and then shrinking down, back to the atom it came from (atom 10) and subsequently become absorbed there.

On itself this is not forbidden but in forward time space such superposition fronts don’t occur this way. But wait, superposition shells cannot be observed. In this case the superposition is superposed by another superposition, unobservable either: the spherical superposition of photons spreading with light speed from atom 14. Mind this evolution is backward in time. But this superposition has a different evolution! It subsequently passes by atoms 13, 12 and 9 before simultaneously arriving at 10 and 11. It misses 4 absorption chances and is then absorbed by atom 10. But hey! the chance to skip 4 chances is larger than the chance to skip 8 chances of absorption! This means we have mistaken prevalent time direction: when a real photon is connecting atoms 10 and 14, then the chance the backward version occurs is larger than the chance to meet the forward version. In this case I would strongly advice not to be conservative here and conclude time to run backward there.

The photon connects atoms 10 and 14. The superposed photon-spheres from emission to absorption, forward as well as backward in time, are unobserved. As far as concerned the basic actions in QED and QCD, like the coupling, the backward time course of events is as valid as the forward time course.

To be fair, QED renormalization calculates the sum of all possible ways through all of spacetime the photon could have traveled from 10 to 14. All possible ways from 14 back to 10 are not added in QED renormalization. Nevertheless, QED works perfect without the backward version. I guess it has never been tried, adding the backward version in QED, but I think, since the coupling has no time arrow, there should have been a backward contribution in QED.

Unless there is time arrow in the vacuum itself, spoiling the superposition. If backward time vacuum is distinguishable from forward time vacuum then they will not superpose. A choice out of the two of them, forward and backward, will be made.

Well then, is there a time arrow in the cloud? If forward time vacuum and backward time vacuum are indistinguishable: no, there isn’t. I mean, yes, there is, but only local and shortliving and supposed to occur in equal amounts forward and backward. There is a cloud of atoms and photons rushing between them, but a large scale time arrow is absent. That is, deep inside the cloud. But the border of the cloud emits the heat radiation fitting to the cloud’s temperature into the void.

10) In the previous item we considered a large cloud of atoms somewhere in the void between the galaxies. We took them all of the same kind, H or H2 or C-60 buckyballs, or anything.

Let’s make things a little bit worse. Under the force of gravity the cloud starts to contract, heats up and emits heat radiation of a still higher temperature into the void. The time reversed version of this is radiation from all over the sky around the cloud entering it, heating it up, which makes the cloud to expand and thus to cool down until it finally became the cloud of atoms it started with in the forward version. The heating-up, expansion and cooling down is oké, but where is the radiation coming from? Let’s assume the void around the cloud to be that large there is no help to be expected from matter elsewhere. So the radiation comes out of the void, the void itself. This is unlikely. Finally an arrow of time has appeared.

11) On itself a time arrow is not that strange. In our universe a number of phenomena always go together:

and not completely absolute:

When put in motion and all connecting, all these things, as to speak, force each other to fit in like this.

But what is strange is how the, as to speak, first event chooses its time direction. I mean, time has two directions to go to, forward or backward. Imagine two compartments of space completely isolated from each other. In each of them a cloud as described is contracting and sets the arrow of time. Next the isolated spaces come in contact. How can it be their arrows of time always line up to point in the same direction?

12) So we found it! - the arrow of time. It is in gravity. It wasn’t in electromagnetism, QED. Also the strong force from QCD shows no arrow of time. (The weak force I don’t discuss: I suspect intimate relationship of the Higgs particle with W+, W-, Z0 and sort the Higgs amongst them.)

My proposition at page 3, 4 and 5 of the storyline NEWTON EINSTEIN GRAVITATION is, when in the earth one Higgs particle disappears, along with it an amount of empty space of diameter 10^-20 à 10^-21 meter disappears too. This results to gravitation of the form of the gravitational law of Newton.

In the time reversed version of this, Higgs field along with its associated amount of empty space, would appear where it formerly disappeared, and disappear where it appeared in the forward version. But then vacuum streams reversed direction, streaming out of the earth now and this is a repulsive gravity. Space expands there. Regard fig 5 in page 1 of NEG storyline. The time reversed version of this picture starts with arrow 4, now pointing in opposite direction. The stream of gravity now drags it away from the earth, resulting in an arrow 3 that deviates away from the earth a little bit more. Repeating the process result in a parabolic or hyperbolic path away from the earth. 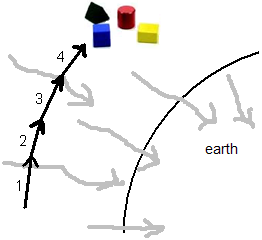 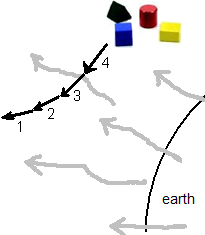 and repelling gravity is not observed; nowhere.

13) The conclusion is, especially in the newly proposed theory of gravitation, that time can’t be reversed. Sorry, no time reversal in one and the same vacuum! The backward time superpositions described in 9 (cloud of atoms, 14 of them better viewed) don’t occur. QED would allow it, QCD too, but the act of giving mass not. The short list at the begin of 11 of always-going-together phenomena turns out to be absolute.

But then again, it should be possible to reverse ALL time arrows simultaneously. One would not notice something had changed. One only should not do this in the single one vacuum you are working in. I assume there is a time arrow in the vacuum and when simultaneously reversing all time arrows you have to reverse the time arrow of the vacuum too. In the figures of item 12 we have just reversed the proposed mechanism of gravitation supposing it is still acting between masses of normal matter and in a normal, forward time evolving vacuum - which is two times wrong. Processes presuming forward time over the space that processes take, and other processes presuming a backward evolving time over the same space, are allowed IN SUPERPOSITION. But when it comes to observation, time turns out to run forward OR backward there. Most probably because vacuum areas of opposite time direction are distinguishable.

But parts of the universe, created isolated from each other, might possess those different vacuums.

This is discussed to a larger extend

At page 2 and 3 of
THE EXPANSION OF THE UNIVERSE

FORWARD BACKWARD TIME DIRECTION
Page 6 and 7
and in


And last but not least there is
TONE
a kind of summary of the physics highlights of this site.
Reading TONE would suffice too.

14) Now it seems clear where the antimatter went, at the beginning of the universe. It had not disappeared; it hasn't not-being-created either; there is no excess of matter over antimatter. It is there, in the center of the voids: repelling-gravity, backward time evolving, dark antimatter galaxies. I guess there are clusters of them there, dark clusters connected by dark filaments, just as much as ours. The dark filaments perpendicularly cross the planes spanned up by the bright filaments that are connecting our galaxy clusters, and vice versa. Two filament systems, one dark, one bright, penetrating each other without touching.

There might be 4 streams there, at the beginning of the universe called 0. First there is a forward matter stream that is us and there is our backward antimatter stream, them. Depicting the timeline:
them

them2
Both us and them originate at 0 and necessarily consist of equal amounts. Next there would be a backward antimatter stream evolving from the end of our universe towards its end at 0, called them2. And there might be another forward matter stream originating long before 0 and proceeding towards its end at 0, us2. The amount of us not necessarily equals the amount of them2. Our universe, us + them2, might consist of different amounts of matter and antimatter.

Another way of connecting the streams might be:
us2 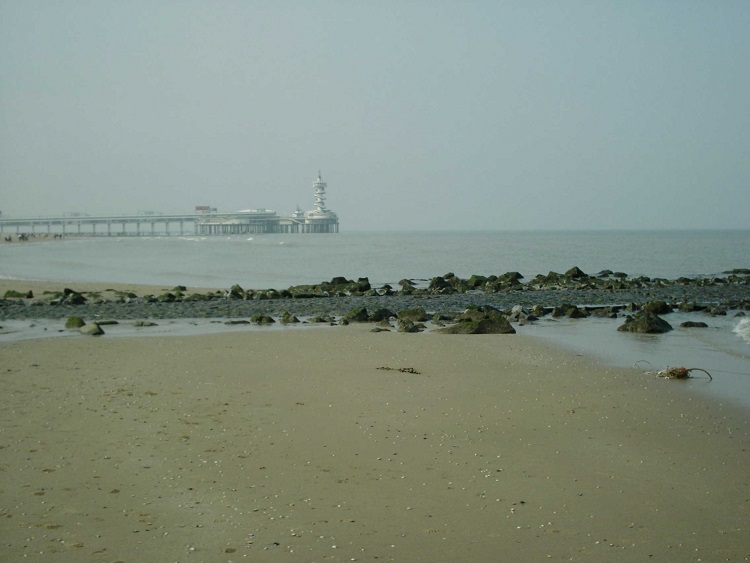 The shore of Scheveningen

The universe expands. But

Read the compelling story in the next page of