For the moment we restrict to photons coming from atoms at A and B only.

Fig. 8: The black ring consists of photodetecting material.
Shown electrons in 1, 2 and 3 (the red dots) are designated to have identical properties. Originally standing still, they developed identical velocity (downward red arrow) due to the impact of one or more photon absorptions and emissions. Then photon A is more energetic than photon B. Photons from C and D, arriving simultaneously at the electron, are designated to follow the same paths as the photons from A and B but are about half their respective energies then. In 4 no photons are approaching the electron.

Our local environment is laboratory Lab1 on Earth and there we perform the experiment as shown in fig 8. We have not yet measured the photon as long as it hasn't reached the black ring. Until then we experience the photon as a superposition of states 1, 2 and 3.

Possibility 4 demands a different electron-state. The electron, started from a standstill, remains at rest there. It can't develop a velocity-state like in 1, 2 and 3.

So for practical use this leaves us again with only possibilities 1 and 2 in our local environment.

(For gluons, in stead of photons, this reduction would not have taken place!)

When in our local environment both photons exist (observer 1), so do the atoms that emitted them (1 state).

When both photons are not observed in our local environment, both atoms remain in superposition of existing and not-existing - with 4 possibilities to enter then (4 states).

The local environment around A

Us observing 2 photons, thus having entered atoms A and B both existing (1);

Us observing photon from A thus having entered A existing, experiencing in superposition (2) B existing and (3) B not existing;

Us observing photon from B thus having entered B existing, experiencing in superposition (4) A existing and (5) A not existing;

The local environment of A knows itself and thus has already entered one of the possibilities A existing or A not existing. Each state in a superposition has a reality-experience of its own, that's the starting assumption in this website. If A exists then at least this reality-experience consists of a virtual photon emitted by A and immediately thereafter reabsorbed again by A, as a decoherence-effect needed for self-knowledge. The photon makes A enter the existing state out of a superposition of states, in some of which it isn't existing. It observes it selves by the photon and in doing so enters the existing state. The paths of the self-confirming virtual photon then determine the spacetime of its universe: ordinary 4-dim spacetime or one of the described torus-shaped spacetimes that are embedded in a more-dimensional space (see What is a coupling? at page 4 of this storyline). Or a combination of them. Or a superposition of those spacetimes. A torusshape, especial a very small one, does provide an easy way for the virtual photon to be reabsorbed by its origin.

It has to be stressed again that knowledge is at value only if it actually has reached you. A particle representing the knowledge has to reach you. Only then it can make you enter a world out of a superposition of worlds. Information spreads with the speed of light, always and in all directions, by means of massless virtual particles like the photons.

As observed from A, in the first 100 year after t=0 the experiencing of the 9 possible states from the 4 distinct observers in Lab1 has no value. No signal of the experiment can have reached A yet, so this abstract knowledge is true but meaningless in the first 100 year. But in the second 100 years after t=0 the interference pattern of all those 9 possible states from 4 distinct observers has actual reached A. And that interference pattern will remain intact as long as no observation by A confirms any state.

Just after the same first 100 years information of A has reached our local environment that, if we observe that A exists, cause decoherence effects that render our possibilities (5), (7) and (9) to zero value (collapse of the wavefunction). If we have an observation A exists, the other possibilities disappear. But A doesn't know that yet. Only at the end of the second 100 years A knows that we know. So during the second 100 years after t=0, A - all A's - live with the knowledge of themselves existing while experiencing a superposition of states in our local environment from which in some of them A is not existing. 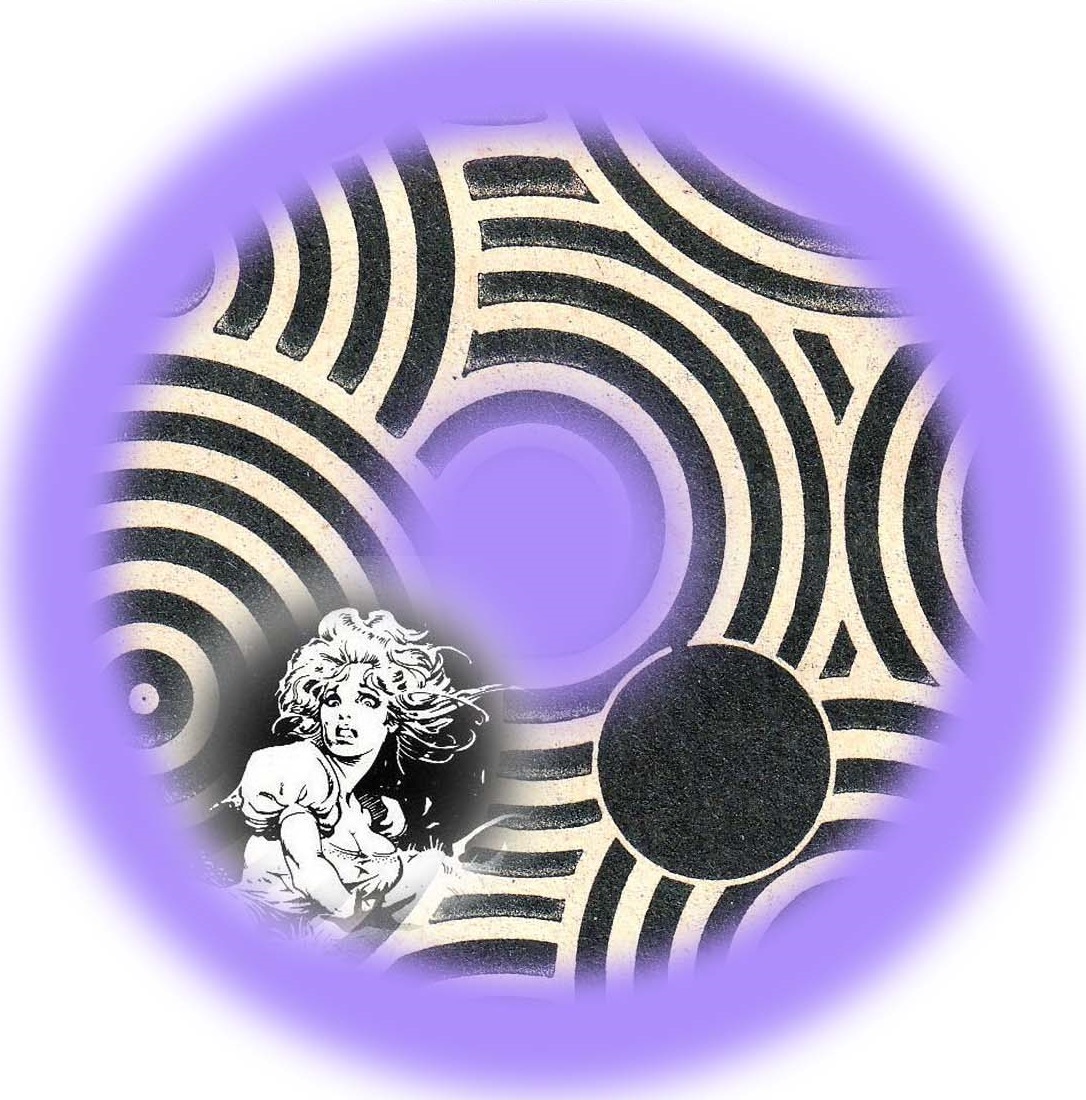 So the things we experience from the outside don't necessarily have to tell a logically coherent story. Contradicting parts are allowed.

A experiences the existence of worlds in which A has never existed and eventually might never exist.

In other words, there would never be any superposition anywhere! All the superposed states of the electrons in an atom in groundstate would be distinguishable by the tiny act of gravitation each electron causes at every coupling with a photon. This counteracts observation in which QM rules the atom's world.

Recall the famous two-slit experiment. When the electrons (we do a two-slit experiment with electrons) are observed at one of the slits with electromagnetic radiation of too long wavelength, then the interference pattern behind the slit still appears but only partially. The interference pattern is partially drowned in another pattern of not-interfering bullet-like objects giving one distinct peak of hits just behind each slit.

So my guess is that one bit of gravity is not enough to spoil any interference pattern in an observable way. Then gravity does spoil every superposition but only for the vacuum to know, the vacuum grid. And the grid is not going to tell us about it. Observers like us, that observe electrons with light particles, will not notice this low rate of spoiling. Everywhere we shall measure precisely the results of superpositions according to QM.

And then again, how precise is the spoiling of the superposition as observed by the vacuum itself? Does a bit of gravitation, propagating through empty space, unambiguously determine the exact place and time of its origin? The precise vacuum marble that has been absorbed? Or can it backtrace to the vacuum marble next to it too?

In the second 100 years after t=0 the local vacuum around A experiences 9 states of the vacuum around us (9 usses on Earth) in superposition - from which in 3 of them A is not existing.

1. Us observing 2 photons, thus having entered atoms A and B both existing;

2. Us observing only 1 photon from A, thus having entered A existing, experiencing B existing too.

3. Us observing only 1 photon from A, thus having entered A existing, experiencing B not existing.

4. Us observing only 1 photon from B, thus having entered B existing, experiencing A existing too.

5. Us observing only 1 photon from B, thus having entered B existing, experiencing A not existing.

6. Us observing no photons, experiencing A and B both existing

7. Us observing no photons, experiencing A existing but not B

8. Us observing no photons, experiencing B existing but not A

9. Us observing no photons, experiencing neither A nor B existing.

Knowledge is at value only if it actually has reached you. When 100 years after t=0 A has no observations at its disposal, then the interference pattern remains intact. However, when 100 years after t=0 A is able to receive visible light and/or by any means could interprete gravitational signals caused by the Higgs field absorption, then A immediately enters one of these 9 superposed possibilities (collapse of the wavefunction). In the view of this site, A splits in 9 A's, each A now being part of the world of one of the 9 possibilities.

Can an Outside Observer (OO) play a meaningfull role? Let's suppose there is an Outside Observer about half way down the distance Lab1 - atom A. We didn't mention so far, but we assume atom A, Lab1 and OO standing still relative to each other. The first 50 years after t=0 OO isn't aware of the experiments in Lab1 at t=0, nor of the existence of atom A. Let's asume that 50 years after t=0 OO has no distinguishing observations, nor from Lab1, nor from A. Then OO experiences the superposition of 4 observers at Lab1. And, only 150 years after t=0, OO experiences the superposition of 9 local environments at A, as a result of an interference pattern having proceded from Lab1 to A and then from A to OO. Then OO experiences the conclusion that A experiences the existence of worlds in which A has never existed and eventually might never exist.

The Sea of Possibilities

letters are created by 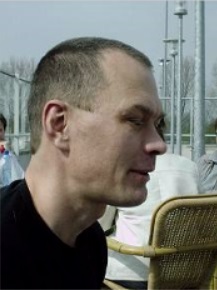 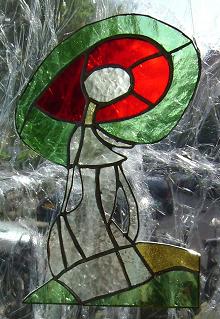 made by Bep Planken
My mother made one of Frits' drawings in stained glass.

See page 2 of
the storyline
DIMENSIONS

My brother Sham is an Agnostic. Those people say humans cannot know something/anything from the first cause (God, the absolute) or in general from the supernatural.

If you cannot know e.g. whether there is a God or not, then those states are indistinguishable. Quantum mechanics then says these states go in superposition. They exist at the same place and same time without seeing each other, and this remains so until something - an observation - decides. There isn't one Thruth, there are more! And when it finally turns out there IS one Truth, this not necessary has always been the case...

I believe in physics. Physics over God, something like that.

I am standing on a plain, it is cold here. I have an appointment, I should meet a person that knows the Meaning of Life. In the distance I see a person P, wearing a jacket, hooded, hiding its age, sex and race.

I think the thougts of P are in a superposition of all possible thoughts that P could have had there, at that moment. The thoughts must have had its origin in the present you observe and the past you remember. The thought-path must obey the laws of physics.

Each of these surroundings has a superposition of pasts that could have led to it, each past accompanied by a fitting future.

And in each of these 4-dimenional spacetimes P is in a superposition of all the thoughts P could possibly have had in that particular spacetime.

There is no point in asking what a person is thinking. It will turn out to be a choice out of the superposition, determining your 4-dim spacetime a little bit more. But the answer you find is always infinitely less than it was before it was given.

There is no point to an answer.

I stopped asking for the meaning of life. We cannot distinguish between the several possible meanings and therefore quantum mechanics says they all superpose. Even 42.

I am standing on a plain, it is cold here. I have an appointment, I should meet a person that knows the Meaning of Life. In the distance I see a person P, wearing a jacket, hooded, hiding its age, sex and race.

Here I am, waiting. What am I doing here?