Can 2 gluons annihilate to 2 gamma photons?

The neutral pion (quark composition u u, where u means anti-u) decays to 2 gamma photons within 0.84 * 10^-16 seconds. The neutral eta particle (quark composition d d) decays into 2 photons within 5.5 * 10^-19 sec. So two quarks can convert to two gamma photons. The lifetimes indicate electromagnetic decay, possible because of the electric charges in the quarks. But these are quarks, not gluons. The gluons have no electric charge, they can't decay electromagnetically.

A gluon and its opposite don't annihilate. Their result is given by their quaternion multiplication. E.g. i * -i = 1, a colorless gluon, a glueball, but anyhow just another gluon.

Two gamma rays can never yield 1, a colorless gluon. Well, that is the assumption.

The model that a gluon consists of two quarks massless coinciding leads to the possibility of spin 0 gluons. In the storyline QCD, page 5, paragraph Meson exchange ends with: The two quarks of a massless pair force each other to follow same path, because when they separate they have to gain mass, and for that the energy is not available. So there is no need for spin alignment to make the pair cohere. This is similar to page 5 of NET FORCE IN QED. The quarks naturally appear with opposite spin, with a sum of zero spin. Zero spin then is a spin 0 gluon.

In the paragraphs The Higgs field 1, 2 and 3 we constructed the vacuum of spin 1 gluon pairs. The spins align to a spin 2 particle, spin 2 or spin -2. In matter one of the two gluon spins might be swapped, yielding a spin 0 particle that we dubbed the Higgs boson. But now it is clear we don't need spin 1 gluon pairs to obtain a spin 0 composite - we can use spin 0 gluons directly to construct the vacuum from. We don't need spin alignment for coherence of a pair of gluons, if there are gluon pairs they may have opposite spins (however, there is no meaning to opposite spin 0 particles: -0 = 0).

One is tempted, when the gluons making up the vacuum are white, to suggest pairs are not needed anymore to construct the vacuum. Just sole white spin 0 gluons making up the Higgs field and the gravitational field for the hadrons. The Higgs field, the gravitational field and the vacuum, that is the same thing then.
In paragraph Filling in the vacuum marbles at page 2 of this storyline, between (2.1) and (2.2), and also at (5.4) in page 5 of QQD is conjectured the three dimensional vacuum of one “now” moment coheres by color, the vacuum marbles of space glue by color. While the subsequent moments in time glue by white; in fact they are not bound then, they don't glue. (But they do make a choice out of the Sea of Possibilities, determining and defining the relative distance of subsequent moments in time.) So in quaternions, to maintain difference between space and time, we take the vacuum not only to consist of white gluons in pairs as vacuum marbles, but also colored gluons in pairs.

When done, then there is no way anymore to yield a spin 2 particle, as the graviton is supposed to be. But in the picture of gravitation as sketched in NEG page 3, 4 and 5, maybe such a graviton isn't needed anymore. I cannot judge this.

This means the vacuum of this page, made of spin 1 gluon pairs, might not exist. Or is some kind of “higher state vacuum”.

The glu2on ( -1   -1 ), normal part of backward time evolving vacuum, is massive and is forbidden as vacuum particle in our vacuum. But that doesn't mean it cannot exist here.

A proton (take e.g. a proton) reacting with ( -1   -1 ) is F * -1 * -1 = F. One of the quarks of the proton is reversed time by the first -1 (the other 2 are not), changing its color into its anticolor. Subsequently the other -1 changes it back again. What if the second -1 is absorbed by one of the two other quarks? In QCD this is not permitted, because leaving behind a colored end state of one quark with color and two quarks with anticolor. In QQD this is permitted since the product end state of the colors of the 3 quarks still yields 1, a white end state, see the QQD storyline page 3, (3.15) in paragraph Multiplication order and page 7 Application 4.

Well, that is, the color sum end state is not zero (see (3.18) in the same paragraph Multiplication order at page 3 of QQD). So this is NOT permitted.

The first -1 may be at proper place already (at about 1 proton diameter, not more, not less) , but the second -1 travels over the grid that consists of between 10^20 à 10^21 vacuum particles per meter, see Radius of the Higgs boson until it is at proper position to react with the other quark. The vacuum does not absorb the lone massive black glueball. See also QCD, page 3, paragraph Other colorshifts and mesons Fig. 3.9 where is argued the black glueball is a candidate for dark matter.

When both -1 are virtual, then the range plays a role. Because massive, -1 only has a short range. Are vacuum particles virtual? No, I don't think so. The emergence of a vacuum particle goes together with a real small contraction of the vacuum and in this way it had payed for its existence. So no range arguments for vacuum particles.

A meson reacting with ( -1   -1 ). One of the quarks can absorb the first -1 and subsequently the second -1. Can the other quark absorb the second -1? The quark becomes the antiquark while the antiquark becomes the quark, as far as the colors are concerned. The electric charges of course don't interchange. But no one will ever come to see the e.g. +2/3 electric charge combined with an anticolor.

Is there interaction between the leptonic and gluonic Higgs fields? Both fields are fields of all possible velocities, see previous page.

Gluons don't couple to photons. So no, there is no direct interaction between the fields.

The picture sketched in The proton at page 4 of QCD tempts to design a dynamic vacuum.

The gluons of the vacuum are pushed to each other to a certain distance that happens to be 10^-20 à -21 m. At larger distance they would feel too much force and attract each other. Smaller they feel not enough force and pass each other by.
Well, the gluon pair is massless and moves at lightspeed, so the two gluons in the pair are “frozen in time”, according to SR. And all the gluon pairs of the vacuum together are “frozen in the Bose condensate”.
Dynamics and being-frozen don't really go together, don't they?

When the fields are not superposing and are not frozen whatsoever, then in the vacuum cube chess board picture the ( i   -i ) vacuum can be pictured as a Na Cl grid, the i's instead of the Na and the -i instead of the Cl. Unlike the Na Cl grid the i and -i spots have equal volumes. Likewise the ( j   -j ) and ( k   -k ) grids. Then there are time borders between the vacuum particles. These time borders are flat planes forming a cubic grid with alternating an i or -i in the center of each cube. The cubes are alternating forward and backward evolving in time. Except for the ( 1   1 ) grid that is entirely forward time evolving and without any time border. It's the only one.

I proposed the photon as a composite of an electron and a positron, massless coinciding within their time borders, see page 5 of NET FORCE IN QED. Electrons and positrons are guided by Pauli matrices too. When multiplied they yield a quaternion unit, see page 9 of QQD. But quaternion units are designed as colors in this site. There is no color in the photon. So how to address this? It can be spin 0 photons I thought to build the vacuum from, but still their composing e+ and e- Pauli matrices will yield a quaternion unit, a color.

Mind there is a difference from GR here. In GR all energy gravitates. But gluons have no mass, they don't have net absorption from the Higgs field and so don't gravitate. Despite this they definitely will have some energy. SR is not in doubt, they have mass-energy according to E=mc

but this mass doesn't gravitate.

Another difference with GR. In this site around antimatter like a positron, there is a time border. Outside the time border, in our part of the universe, the gravitation of the antimatter is repelling, as observed by us, see EXPANSION OF THE UNIVERSE, page 2, paragraph The gravitational field and the expansional field and the next two paragraphs. This causes expanding space between the antimatter and us. The matter of the electron causes contraction of space around it of same magnitude, the electron gravitates. Therefore the gravitations of an electron an a positron cancel to zero.

This describes the composition of an electron and a positron to become massless when within their respective time borders and in this way become the photon. Photons don't absorb from the Higgs field and so don't gravitate either,

this reaction equation has net gravitation zero at both sides of the arrow. 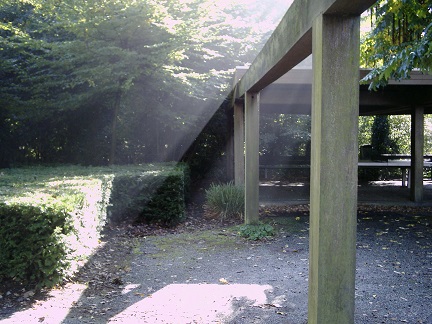 EXPERIMENT TO MEASURE THE GRAVITATIONAL PULL ON ELECTRONS

Use a sphere of e.g. 1 meter diameter, completely closed and made vacuum. Attached to the inner wall there is a kind of needle that at its point in the center of the sphere, releases electrons into the vacuum. The electrons drift through the sphere until they hit the wall, which is entirely covered by small patches of graphene, wired to the outside. The electrons absorbed by the wall, constitute a current that is led through the wire and measured.

Shield the whole sphere from outside electric and magnetic fields e.g. by covering the outside by earthed graphene.

If electrons have weight, there should be a slight excess of hits in the direction of gravity and a small deficit of hits in the opposite direction. Now charge the right patches as such the excesses and deficits disappear. From the applied charge one can calculate the pull of gravity on electrons.

Vary the orientation of the sphere and its place on earth and take one with you in orbit.