These PREVIOUS ATTEMPTS are no longer in use. Some of them work with colorshift, an approach that is abandoned now.

In QCD there are 6 colors: red, green, blue, cyan, magenta and yellow. The gluon in QCD has an upper and a lower color, so there are 6 x 6 = 36 possible gluons. Nine of them work between quarks. Another 9 between the antiquarks. Still 6 more between the opposite colors in mesons. That's it. This leaves 36 - 9 - 9 - 6 = 12 unused gluons. In what I called the colorshift interpretation I thought to build the vacuum from them, thought to fill in the vacuum marbles with them. Expressed in colors these gluons are:

These gluons in fact are used in Application 4, page 7 in the QQD storyline.

Colorshift is an abandoned concept now. We now use quaternion units instead of colors.

do exist. That is,

do not exist in our vacuum as real particles. Does this mean the vacuum consists of

, instead of glue2bals? A real

would be absorbed by the vacuum then, while

would annihilate there, what would be why they don’t exist as real particles.

would only live until the spin flips. But therefore they need a W+ W- Z0, and those are rare. Would that do? Besides, the sun does show a deficit of electron-neutrinos. Low-energy as wel as high energy neutrinos are both missing, but not in the same amounts. And the observed neutrinos from supernova 1987A? Once freed from their source, all the distance to us they didn’t met any W+ W- Z0 to make their spin flip; is that realistic?

, making this contribution disappear from the vacuum. The

is no real particle either. I guess it must have been transformed into something else. But what?

The spin down neutrino field

is used in my discussion on time reversed gravitation, see The neutrino 2 below.

If the vacuum consists of neutrinos only, it would exhibit delay in dragging particles like quarks and gluons because the average reaction time for the strong nuclear force is 10^-23 seconds. Neutrinos, working through the weak force only, cannot rival that, see the introduction of page 7 of QG.

So this would be the vacuum: two boson graviton fields gl

(spin -2) in superposition with one fermion field

Or is it a real mix? Gluons and neutrinos don’t couple, so there seems to be no objection. When it is a real mix, the possibility of a spin +2 - 1/2 = spin +3/2 vacuum-particle arises; wasn’t that of interest in supersymmetry? But no spin -3/2.

The vacuum does not consist of any state of electrons or quarks, protons or neutrons, or photons, since these particles observably do not disappear into the vacuum. They are stable.

But why keep up 10^-23 sec reaction time for the vacuum particles when dragged-by masses don’t react with it? In page 2 of this storyline, paragraph Filling in the vacuum marbles, is suggested that in fact all particles always react with the vacuum by means of a multiplication with factor 1 at every moment of existence. Maybe because it confirms the location in space and maybe it causes the transition of the actual moment in time to the next moment in time.

Here I already see that forward and backward time evolving vacuum have same composition and sought to distinguish them by difference in the neutrino field. This was shortly before the quaternion approach made its entrance. For years this was item 14 of page 1 in the storyline THE EXPANSION OF THE UNIVERSE.

A := B means A becomes B by means of time reversal, that is, the film of the event being played backwards. The event before the := always can exist physically with a reasonable chance of occurrence. If the reversed event after the := cannot exist or is very unlikely, the event is indicated by a time arrow.

When the film of a spinning particle is reversed, you see it spin the opposite direction, isn’t it?

When in forward time a gluon is gl

then its backward time counterpart is gl

We furthermore accept according to the CPT theorem:

(spin 0), gl means gluon. The gravitational field is proposed as a superposition of gl

(spin -2). All fields are liquid bose condensates. These fields in concordance with the

field then is the vacuum.

Suppose our vacuum consists of

and backward time vacuum, as observed by us, consists of a bose condensate of

. While it would observe its own existable neutrinos as

When the backward time vacuum would have consisted of

, as observed by us, the border between forward and backward vacuum would exhibit severe annihilation effects and all the vacuum would finally disappear.

When one of our real

tries to cross the time border it disappears, being absorbed by the backward time vacuum and making it expand by its volume. Similar a backward time observer would see its

disappear when crossing the border toward our part of the universe. But their disappearance is our emission, and we observe this as if the border spontaneously emits a

inwards the time reversed area, while space shrinks by the amount of the

Colorshift shifts from a color, e.g. cyan, to another color, e.g. magenta. This is a colorshift of +1/3 turn along the colorcircle, see picture at the right. When played reversed time direction, the shift is opposite:

and vice versa. The gravitational field remains the same.

. So the Higgs field remains the same too, under time reversal.

The difference between forward and backward time vacuum is fully on the neutrino part. A tiny difference, but sufficient to make the vacuums distinguishable and thus to spoil their superposition.

Once again I express my strong suspicion about the weak force W+ W- Z0. It is tempting to somehow identify the proposed Higgs particle gl

with the W+ W- Z0. The W+ W- Z0 are very short-living too, being intermediate states only, like the proposed Higgs boson. In this page, the glue2ball Higgs particle is accompanied by the spin down neutrino: gl

. Somehow a mix of the mentioned particles gives the electron its mass.

In page 7 of the storyline NEWTON EINSTEIN GRAVITATION I introduced the concept of the missing elements. It suggests how the act-of-giving-mass to the electron also sets its state of motion relative to the Higgs field where it gets its missing elements from. And when the Higgs field streams, the induced electron state streams along with it. In doing so it does avoid interaction with the gravitation field, but here that is beside the point then. However, no light is shed on HOW the massive particles take their missing elements from glueball and neutrino vacuum particles. The whole missing element concept first have to be worked out properly.

Quote from the missing elements page 7 of the storyline NEG:
In the standard model the electron only reacts electromagnetic with the photon and weak with the W+ W- Z0 H0 particles. The electron has no other reactions. Here H0 is the Higgs particle. Since the neutrino’s turned out to have mass, the rule seems to hold:

Therefore I took the freedom to classify the Higgs particle amongst the weak particles. 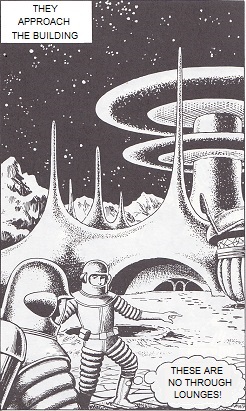 In CERN they increase energy. Here follows a prediction about what they are going to see at CERN. First the graviton and the Higgs particle are glueballs made of 2 gluons. They’re gonna see glueballs.

In the case of gravitation (gl

) the glue2ball remains identical, but in the case of the Higgs field, the (+1/6 gl

) or vice versa. The gravity field remains the same, but the Higgs field changes. The +2/6 gluon field now has become a vacuum field and can no longer be real. But the +2/6 gl and -2/6 gl are the gluons that keep the quarks together in the baryons! Those gluons now disappear, absorbed as they are by the vacuum and enlarging it with their volume. So, as long as this pumped up vacuum exists, the 3 quarks of a baryon are freed.

The two quarks of a meson exchange +3/6 gl (+3/6 gl and -3/6 gl are gluons of identical colorshift, see the colorcircle.) The real mesons remain intact until energy is sufficient for vacuum particle reaction e.g.:

which could recombine to two glue2balls (+3/6 gl -3/6 gl) and (-2/6 gl +2/6 gl), or one glue4ball, or anything. These are all vacuum glueballs. Now ALL gluon fields have become vacuum fields and all quarks are freed. 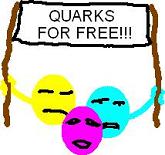