When we stick to 3 gluons emitted simultaneously we can allow 1 quark to emit 2 gluons or all 3 gluons. Simultaneously, or one after the other. At least 1 quark doesn’t emit a gluon then.

We can allow 1 gluon to be emitted that subsequently emits a second gluon. Or that first gluon emits the 2 other gluons. Simultaneously, or one after the other. Or a gluon emits a gluon that emits a gluon.

In groundstate there is hardly energy for glueballs to come to existence. If they appear in analysis they have to be reabsorbed before the first measurement. Since all 3 quarks can always do so in the antibaryon, there are 3 different paths of nearly equal length for a glueball to be absorbed, each ending on a different quark. A glueball can also be absorbed by the 1 or 2 remaining gluons, if there are any.
In the antibaryon the number of possibilities that contain glueballs will be multiplied by 3 for each glueball appearing in analysis, plus the number of gluons remaining at that moment.
Two glueball’s can absorb each other, reducing the number of glueballs present by 1.

All these possibilities have to be added to the mentioned possibilities on page 3 of this storyline (“Three gluons emitted simultaneously”).

The last possibility considered on that page, triangle nr 11, contains 3 glueballs and its number of possibilities increases from 1 to 3 * 3 * 3 = 27 (plus more). Not thát boring after all.

Provided the antibaryon is left behind white, the glueball can leave the antibaryon, by example an antiproton. It can reach the quarks of a neighboring antiproton or antineutron in the nucleus and become absorbed by one of them. Due to distance reduction this contribution is smaller than the absorption in the private antibaryon. The antiprotons and antineutrons in other nuclei are at least 10 exp 5 times farther away and these possibilities contribute lesser by the same amount.

Another group of possibilities that count separately are all possible ways for 2 gluons (instead of 3) to be emitted simultaneously by the 3 quarks of an antibaryon. Regard the mentioned 186 possibilities with at least one zero-shift gluon (glue1ball) emitted. The 3 possible glue1balls

All possible ways for maintaining white state after 1 gluon emission, are found by taking the possibilities with at least 2 glue1balls and replacing both balls by no emission. These are the triangles 9, 10 and 11, giving extra possibilities 6 + 6 + 1 = 13.

There is 1 way to emit no gluon at all, the 3 quarks going from nearby points A, B and C without any further emissions to nearby points D, E and F.

The total amount of possibilities of the 3 quarks of an antibaryon going from nearby points A, B and C to nearby points D, E and F and emit and absorb in between 0, 1, 2 or 3 gluons, is 186 + 58 + 13 + 1 = 258. Except for the extra possibilities of glueballs to be absorbed. Or the shifting between gluNon-states.


Do larger numbers of N count?

(...) only the colorshifts counts. Taken as a fraction of a full turn along the colorcircle holds for 2 gluons meeting:

These are angles, their cornerpoints taken in the white center of the colorcircle. In fact it is just as if the gluons are complex numbers of length one. When coupling, the gluons multiply, their length remaining 1 x 1 = 1, and their arguments adding, as complex numbers do.

The angle a, or argument, is quantized:

= (complex number of length one) times (its conjugate)

The graviton is 1. The vacuum is not nothing, it is 1. And another 1. Are these the mathematical 1? And don't forget the

Mark the resemblance with the value of g, the strong coupling constant. Is g somehow the graviton/Higgs boson? It is worth trying to set g = 1. Precisely 1.

When applied twice, a shift of a color over an angle of 1/6 of a full turn will yield a shift of 2/6. When a shift of 1/6 cost energy, then twice that shift will cost twice the energy.

Applying a full turn along the color circle is like circumventing a real lake by walking. When having circumvented the lake for 1/3 of its contour, you arrive at a point. When circumventing the other direction for the other 2/3 of the contour you end up at the same spot, having applied twice the energy you needed for the 1/3 tour. Is it the same for gluons? Applying a colorshift of 1/3 ends up at the same color state as the application of a colorshift -2/3 times a full turn along the colorcircle. If so then the -2/3 colorshift cost twice the energy of the 1/3 colorshift.

Maybe every gluon just costs the same amount of energy. Processes with least amount of gluon reactions will cost least energy then.


Can we forget about the colors of the quarks too?

Just for the moment, imagine the color is in fact the phase of a wavefunction. If a full turn around the colorcircle is precisely one wave

then the 3 colors are each 1/3 of this wave, which yields very unequal waveparts. One can distinguish the colors by the difference in shape of the colorwave. But the colors would no longer be equally fundamental. This happens likewise with a circle of 2 waves divided in 3. So it seems the most convenient to regard one full turn around the colorcircle as precisely 3 waves

and each color as one wave 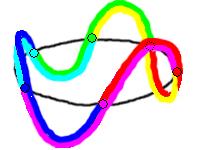 If the wave of a color is

then the wave of an anticolor is

If a color should be an arbitrary 1/3 of the colorcircle then the anticolor has the same length but its begin- and endpoints shifted by an extra 1/6 of a turn. Then a particle and an antiparticle do annihilate to zero. For color-reactions within one and the same hadron little difficulty is expected then. But when two hadrons meet the result becomes unpredictable, depending on the arbitrary shape of the colorwave in each hadron. So I assume a colorwave always has to start at zero, then going to one maximum, back to zero and going to the opposite maximum and finally ending at zero.

The colorcircle is closed and offers six points on it that are more special than others: the zero-points where a color or anticolor begins or ends. There is nothing attached to those points to let some prevail above others. So one can arbitrary choose to divide the circle in 3 colorwaves or in 3 anticolorwaves or even in 6 “halfcolorwaves”! So there is not really a difference between particle and antiparticle then. When 2 baryons meet, one cannot decide whether this is a meeting between 2 quarks or 2 antiquarks or 1 quark and 1 anti.

The colors (and anticolors too) are equally fundamental now, but they don’t differ from each other. They can be identified with each other. The colorstates differ only by their order in the colorcircle. One can call an arbitrary wave yellow, the next one coupled to it shall be cyan then while the previous one - if there are 3 of them - must be magenta. One cannot distinguish between

This leads nowhere. No, we cannot forget about the colors of the quarks.


Do gluons really orbit each other?

Another picture. Two gluons meet each other, couple and then re-emits each other in preference directions: in opposite or the same direction (4 possibilities:

). In the last 2 cases they simulate a composite, but in fact they are 2 independent gluons accidentally coinciding and coincidentally moving in the same direction. Of course this can only explain the zero orbital impulse momentum state.
If two gluons really orbit each other and still really move about with the speed of light, they might encounter black-hole-like properties.

Gravity curves spacetime up until the event horizon of a black hole. Still larger curvatures lay behind the horizon, impossible for us to see. A ray of light is kept in circular orbit around a black hole at a distance of 3/2 times the radius of the event horizon, although it is an unstable orbit. So when two gluons orbit each other at one and a half times their event horizons, this is physically difficult but not impossible. One has to prove the gluon has an event horizon.

But this isn't General Relativity's gravity with its tensors, but Colorforce of QCD consisting of innumerable wavefunction contributions. It isn't spin-2 gravitons, but spin-1 vector-bosons. There is no experimental evidence at all about the velocity of the gluons.

Remarks like They just merge and split remind more to superstrings than to particles. Can quarks be particles while gluons are strings?

In this site so far I distinguished between a composite state of 2 gluons (dubbed glu2on) and the 1 gluon resulting when those 2 gluons merge. When the gluNon-concept must be abandoned, this difference disappears, leaving sole gluons only. This will cost us a lot of possibilities.

A gluon then seldom absorbs another gluon; most often a gluon absorbs 2 other gluons at the same time. 3 gluons can merge to 1 gluon, 2 gluons rarely merge. It affects a building block of QCD, the coupling between 2 gluons. What is the chance for 3 gluons coupling?

For the moment, since we know little about the structure of the gluon, the gluNon-concept is not abandoned. But it must be looked at carefully.