Does the field sag in shell after shell, as we suggested so far?

At coupling locations space itself disappears and, while rearranging, make distances to shrink. A distance is the number of vacuum particles on it, that’s all there is to distance, and to space. When there are lesser vacuum marbles along the line connecting two objects, then these objects thus are nearer to each other. There is no space behind the space (except for the field of all possible velocities, and those are superposed to us).

The assumption is, a velocity can be put in a box. One can embody a velocity by a mass m2 having that velocity and subsequently raise the walls of a box around it, around a sufficiently large part of its track. We take the box standing still relative to m1, we construct it like that. The walls of the box shield off observation of its content, but we trust m2 being within still has its velocity. When the sagging-in shells around m1 do reach m2 then the box is dragged by, and with it all its velocities in it.

As long as the box is closed, in principle something strange happens. Quantum mechanics demands that at the moment full shield is applied, the box content suddenly is in superposition of all possible contents the box could have contained too. Savior are the couplings in mass m2, causing sagging-in shells around m2 that reach outside the box and betray its content to outside observers. So we indeed can trust our mass m2 having its velocity in the box. And when opening the box no - or virtually none - wavefunction reduction is taking place. We find m2 being accelerated along with its enveloping box, despite m2 is not standing still with respect to the vacuum of the sagging-in shells around m1.

There is no ”Pressure from the outside” forcing the marbles around to fill in the empty spot, to ”fall into it”. The disappearance of a vacuum marble, creating a hole there, is equal to the shortening of distances through the hole. But there must be some rearrangement of the remaining vacuum marbles, to decide which marble glues to which other one. It is this decision that defines the empty spot mentioned at page 3 of NEG. Mind there is no space behind the space, except for the field of all possible velocities.

The absorption of vacuum particles / Higgs particles is described in QUATERNION GRAVITATION, page 2 and 3. Especially page 3, paragraph The Higgs Mechanism 2. But this description is merely an algorithm. A quantum mechanical description of the mechanism how the rearrangement of vacuum marbles actually works, is still missing. Maybe the gravitation theory of prof. Erik Verlinde could give shape to this. Or the simulations of Renate Loll. Also in E8 X E8 there are used tetrahedrons to describe empty space, but I know VERY little about that.

Rule 3.26 at page 3 of QG states that two gluons of opposite sign do not react. This means the vacuum particles as they are do not cohere. But suspected is they would start cohering as soon as mutual distances would increase.

Also the application of the dark multiplication rules is not yet completely settled, see the discussion points 3.4 up to an including 3.9 in TONE at the end of chapter 3. Also seems to hold conclusion point 3.6: as long as the quarks do not near within their time borders, their reactions on Earth work out forward time evolving, quarks as well as antiquarks.

There is no space behind the space. Therefore, when fully disconnected, vacuum marbles will not see each other anymore. Their relative distances become undefined. They have become superposed states relative to each other. The gaseous vacuum state is the whole of superpositions of vacuum marble states PLUS all other indistinguishable states. The sea of possibilities.

Dragged-by objects in the field don’t react with the vacuum. Therefore, when objects are dragged by, the wavefunction of the vacuum remains intact. So the act of dragging on itself doesn’t influence any instantaneous or not instantaneous sagging in.

Instantaneous sagging-in is a way of sending messages faster than light. Infinite fast, in fact. Experiment 2 at page 2 of EXPERIMENTS ON THE COLLAPSE OF THE WAVEFUNCTION confirms the speed of light is the upper limit for every displacement, any kind of transfer of information by any means. Especially is stated branching of worlds cannot spread faster than c. We continue this point of view. Sagging in of the gravitational field, originated at a vacuum marble absorbing spot, cannot spread faster than light. It cannot simultaneously sag in everywhere.

Well, one never knows. Within galaxy clusters there is no relativistic moving matter of significant mass. The described paradoxes (see About messages faster than light at the right), even when possible, don’t occur. Maybe we just have to wait until the first manmade paradox becomes apparent. In my opinion the past can be changed, a new past and corresponding future can click on to your present environment, see the storyline THE DIRECTION OF TIME.

Experiment will tell. We will see.

Can this be compared with the speed of electrons that conduct the electricity through a wire?

1 Ampere through a wire with cross section 1 mm

Another consideration. The vacuum is thought of as a bose condensate, ruled by one single wave function. The sagging‑in shell after shell doesn’t very much look like one single wave function. It rather is a sequence of distinct processes. So for the vacuum to remain a bose condensate maybe the entire vacuum react as a whole, all sagging‑ins in one single stroke (all sagging‑ins that are the result of one marble absorption, one hole), in the frame of reference wherein the vacuum marble was standing still. Subsequent holes filled in by new sagging-ins, those then are subsequent distinct processes.

But then the propagation speed of the sagging-in shell after shell process is infinite. That a strong force coupling has taken place, a Higgs absorption and a hole formed, is at the same moment known at the other end of the universe. A little too fast, I guess.

At page 24 of a Dutch copy of this book I found the following. Start with a rocket from the Earth and be back when the clock on the ground has ticked away 1 hour. Choose your path such that in the rocket elapses as much time as possible. The larger the height, the weaker the Earth gravitational field, the faster runs the internal rocket clock (GR). The larger the rocket's velocity the slower its clocks run (SR). It turns out that free fall (no acceleration except from the gravitational field) gives the maximum total elapse of time in the rocket. So you shouldn't use the rocket's engine to navigate. At the start just give a single upward thrust such it is back after a fall of one hour.

What does this mean? Is it an intrinsic property of the theories of relativity GR and SR? What is the advantage of having maximum elapse of time in the rocket frame, does it save energy or something? Is it the quantum mechanical result of the interference of all possible paths that are back in one hour? If the gravitational field wasn't inversely squared but had a different mathematical dependence, would then free fall tracks still ensure maximum elapse of time in the rocket frame?

Now I red another copy of that book, an English copy, and at page 37 it says: It's the fundamental principle of Einstein's gravity - that is, what's called the proper time is at a maximum for the actual curve, the real motion of matter.

Let's start over again. The rocket in free fall follows a straight line in curved space. A second rocket, rocket 2, starts at that line, side by side with the original rocket, rocket 1, then deviates from it and then returns to a point on the line where rocket 1 is. Now at the point of collission (be carefull, if the rocket 1 orbit is in the x-y-plane, then perform the rocket 2 track one rocket diameter aside in the z-direction) change to a MCRF* that stands still with respect to rocket 1 at the point of collision. To do so you have to perform a Lorentz transform. Then you have the precise circumstances of the twin paradox.

By the way, the answer to the last question, about if the gravitational field wasn't inversely proportional to squared distance, but had a different mathematical dependence, obviously is: yes, the free fall track still ensures maximum elapse of time in the rocket frame. 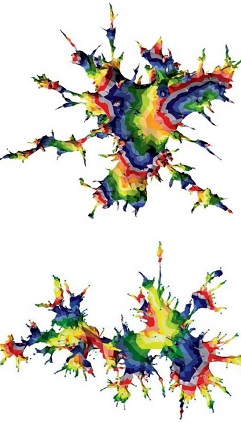 In the years 2004-2005 Renate Loll, Utrecht University in the Netherlands, Jan Ambjörn, Copenhagen University and Jerzy Jurkiewicz, Jagiellonian University in Poland, attempt to construct empty space from a four-dimensional triangulation. Shouldn't this already have been done, long ago? To me it seems one of the first things one tries to do when developing such a thing as QED.

ABOUT MESSAGES
FASTER THAN LIGHT

If one can send messages infinite fast, then one can send messages to our past as well as to our future. One then uses a fast moving mass generating adjustable and observable gravitational changes as the message signaling. In the frame of the fast mass a specific set of gravitational changes appear everywhere simultaneously. As observed in our frame this specific set of changes appear in specific past and future planes perpendicular to the mass velocity (see the storyline about SR). It is true, those planes are far away (for 3 seconds in the past at least a million kilometers away), but from there in a likewise manner the message can be mirrored back to us in a past still longer ago, or a future still further ahead.