We now want to create a line. Classical procedure, founded by the Ancient Greek, wants us then to lay a lot of points in a row.

Classical procedure now wants us to fill in the gaps between the dots with new dots. There is a classical rule then:

After filling in till infinite you get a line.

According to this website, see TONE paragraph 1.1 (and same text at page 3 of NEG), a dot, a vacuum particle, has a finite dimension and can only be laid next to another dot, touching it, without overlap and without space in between. In TONE there is no space behind the space and thus there is no meaning to space between the dots that make up the vacuum.         (3)

A new dimension can be made by laying a row of points, a row of dots, in a new direction, a direction that cannot be obtained by traveling in familiar directions of already present dimensions.         (7)

When filling in gaps between the dots with other dots till infinite (Ancient Greek procedure), those row of points make up a line in the direction of the 2nd dimension. These infinite number of dots between the vacuum particles, meant to construct a line, are supplied by QED procedure.         (8)

Now lay a line parallel to the line you already had through one of the new dots. In fact we now do something that is not yet allowed. We state that it is possible to create such a line, a line that has same distance to the original line everywhere. You can only measure that if the space between the lines is already existing. Space exists of dots of finite dimension, that is the opinion of this website. As long as those dots aren't there, the distance between the lines is not defined.         (8)

When through each dot of (7) in the direction of the 2nd dimension is laid a line parallel to the original line we started with, one gets a plane. A plane is a space of 2 dimensions.

When a lot of planes are laid next to each other in the direction of the 3rd dimension, one gets a space, a 3-dimensional space.

The secret of time is extensively treated in TONE, paragraph 4.1, Filling in the vacuum marbles with gluon pairs (and more or less the same text at page 2 of QG too). But to understand that you have to read chapter 3 of TONE, or (what is the same text) the QQD storyline.

QED works in 4-dimensional spacetime. (We ignore for the moment possible curled-up dimensions.) In QED it is standard to decompose charge-photon-interactions into 3 different kinds of building blocks and 1 rule of superposition. Any electromagnetic process is described in terms of these 3 components alone.

1) An electric charge goes from one position to another;

2) A photon goes from one position to another;

3) An electric charge couples to a photon (it emits or absorbs a photon).

A) All possible ways the process can evolve are superposed.

Steps 1, 2 and A presume the pre-existence of empty space. Only step 3 can be done in a single point that doesn't cohere with eventual other points. It seems not possible to derive the coherence of the dots that make up empty spacetime from QED alone.         (9)

How the dots of empty space cohere, is extensively treated in TONE. Gravitation (chapter 1 of TONE) is interpreted as a streaming of the dots spacetime exists of. In TONE the Higgs field, the action of giving mass to the particles, curves spacetime and the subsequent streaming of vacuum dots curve spacetime back to zero net curvature. The dots are filled in with gluon pairs (chapter 4 of TONE), the dots cohere by the strong nuclear force, the color force.

QED is my favorite theory. 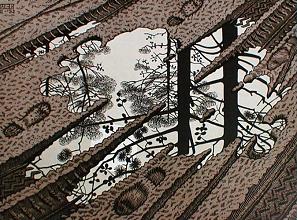