In the standing still frame, links that link local environments (such as cells or dominoes) to neighboring local environments of the same moment, are changed to different links, when being in the moving frame. In fact that's all there is to SR, changing links between the domino's of spacetime. 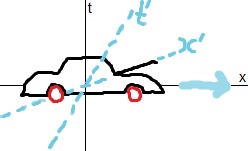 There is a clue to the angle of the tilt. The tilt is such that the speed of light remains a constant, c = 3 * 10^8 m/s. The Lorentz transformations are derived using this clue.

And I wonder what force that is. Is it a particle, the photon, arriving at the local environment, locally making a choice out of a heap of superpositions? That choice, is that the kind of vacuum particles that surround you? The choice of Higgs field out of the field of all possible velocities? The idea is the Higgs field from which mass is absorbed stands still with respect to the absorbing particle. So far so good, but still unexplained remains why the x- and t-axes would tilt then. They do such that c remains 3 * 10^8 m/s. But why? Just an extra difference to make frames that only differ a velocity distinguishable?

Velocity might be non-existent. Velocity, displacement, might be left out from the theory. Leaving only rotations to the point. It would make quaternions more usable.

But it's not me going to do that. Mathematics has never been my strongest point.

Why the fundamental formulas of physics are always so beautifull while their Lorentz transforms are so ugly? (Dirac)

The truth of this remark still is visible for everyone who looks at it. Somewhere in mathematics there must be a road on which the Lorentz transforms are just as beautiful as their original formulas. Quaternions? Quaternions are as to speak specialized in rotation, and the tilt towards each other of the axis in the direction of motion and the axis in the direction of time, IS a rotation. 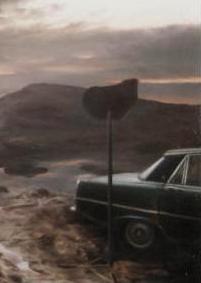 Making a choice out of a heap of superpositions is half there is to quantum mechanics. The other half is the merging of local environments that have become indistinguishable again into one single contribution of the superposition.