Is this soup eaten as hot as it is being served? Well, let's try to investigate a little further.

Imagine a photon in the box on its way from the inner wall toward the body of a person that is present in the box. This photon doesn't see that person yet. For the photon the person is in a box in a superposition of all its possible states. When the photon hits the person's body this acts as a measurement, opening that box. While at the same time another box has formed around the person and the photon hitting it and has closed. In fact, when the photon hits the person, it is as if the photon has permeated through the wall of the box that person is in, adding itself to its content. Somehow it has doubled itself as many times as there were different states in the box and then each single photon enters one specific possible state. It must be like that since when in one of the possible states in the box the photon was missing this would violate the law of energy conservation, which is one of the most founded laws in nowadays physics. Remember any of those possible states is a world on its own, with its own reality experience, but not seeing the other worlds. And every state obeys the same laws of physics. Up until now there are no signs of a different view about that.

The inner observations in the box cannot significantly alter the motion of the objects in the box but they do "nudge" the wavefunction of the things they encounter. These encounters disturb the wavefunction's coherence, its neat order of wave crests and troughs, necessary for generating neat interference effects. In doing so messing it up to some average smeared-out state.

The more smeared out it is, the lesser one can infer from it the existence of different worlds in superposition. But this doesn't say those worlds are not there. You have the smeared-out state interference pattern and in the box is the superposition of all possible worlds that possibly could have led to it. That includes the worlds we know are in there PLUS the worlds that too can lead to precisely the same smeared-out pattern observed by us, Outside Observers.

Environment induced decoherence, as the smearing out is called, works fast. A grain of dust in empty space decoheres in about a millionth of a second, due to the photons of the 2.7 K microwave cosmic background radiation present everywhere in outer space. I consider the background radiation as a kind of riddle, see Standstill at page 4 of EXPANSION OF THE UNIVERSE.

The famous two-slit experiment doesn't suffer from decoherence. Decoherence is not a fundamental feature of empty space. In principle one can think of ways making decoherence as slow as desired. Decoherence explains why special interference effects of wavefunctions do not show off at the earth surface or such place, long enough to measure them.

Is it possible to sufficiently slow down decoherence? We shall see. Decoherence bridges between the quantum realm and our every day reality as we experience it. But, as Brian Green points out at the end of his chapter about decoherence, far from everyone is convinced that the bridge has yet been fully built.

did you know the cat escaped?

Gravitation is the biggest box-opener, choice-maker, realizator of the wavefunction's superposition. In doing so gravity tends to annul quantum mechanics' superpositions. GR fights QM, as to speak.

In chapter 1 of TONE, my Theory Of Nearly Everything, I developed a new approach to gravity. TONE's original text about this is especially in page 3 of the storyline NEWTON EINSTEIN GRAVITATION. In brief, mass absorption from the Higgs field curves space and the subsequent act of gravity curves it back. As a result space is not curved, it only looks like that. TONE is accessible in the upper part of the Contents, click the black dot for the contents. TONE is also in Additions nr 9 in the small contents below nearly each page.

How does gravity opens boxes? Consider a mass in empty space. At every coupling of its constituting particles is absorbed mass from the Higgs field. According to my theory of gravitation , a tiny parcel of vacuum is absorbed along with the mass absorption and subsequently the resulting hole is filled in by the surrounding parcels of the vacuum. This is the act of gravity. Every coupling in the mass (that it must have to maintain its coherence) betrays the location and orientation of the coupling particles in the mass by means of the (in principle) observable changes in motion or observable forces (like weight) of the surrounding matter (like gas molecules). The changes and forces may be too tiny for us to actually measure, but in principle they are. The result is that the wavefunction of masses collapses every single moment by means of the act of gravity.

More about it in paragraph Tone at page 6 of THE DIRECTION OF TIME.

Does the box gain extra mass in the process of photon-doubling? Well, according to TONE photons have no rest mass and do not gravitate. The photon has no net absorption from the Higgs field. But for other particles one must regard this in a quite straightforward way. The interference pattern of the wavefunctions in the box is all we can know about the box's content until we open the box. From that interference pattern is derived a probability division of objects and particles that precisely predicts how much mass of particles and objects can be expected where and when. The observed mass of the closed box is just the end result of this probability division.

Subsequently it depends on e.g. the (in principle observable) change of movement of e.g. air molecules surrounding the box, caused by the gravitation of the mass inside the box. Each of that movements betrays the content of the box to a certain extend and to that extend the wavefunction of the inner part of the box collapses partially.

QED uses renormalization, connecting every spacetime point of our four-dimensional universe with every other spacetime point in the same universe along routes that follow the curves of spacetime. That is the usual assumption, as far as I know. But in TONE spacetime is not curved, it only looks like that. Then the routes used in renormalization are just straight lines through a flat vacuum and time. Isn't it?

QED brings back all things with photons and electrons (in fact electric charges in general) to three fundamental actions.
1) an electron goes from point A to point B;
2) a photon goes from point C to point D;
3) an electron and a photon couple, the photon is gone then.
Let's take the photon from 2) to be equal to the photon from 3), so point B = point D. Higgs absorption only takes place at 3), the coupling between an electric charge and a photon. There are no reactions at 1) or 2), so it can only be at 3).

Key point of QED is that the electron traverses from A to B along every possible route through spacetime. In QED this means that the electron that is going from A to B, splits at A in an infinite number of electrons and each individual electron visits one point in spacetime, couples there with a virtual photon and returns to point B. ALL points of spacetime are visited in this way, also the most distant ones in the uttermost far future or past.

The infinite number of split-off electrons and photons are immoral as Feynman called them. Where necessary the electrons go back in time and go faster than light. The photons can bow into curved paths where necessary. It are not the usual particles, not quite. Or the picture is incomplete yet.

The immoral electrons don't see each other, they don't react with each other. They are superposed to each other. It is for sure the virtual photons they couple with, do not exist all in the same universe. Such a universe would be filled with photons at every point in spacetime.

ARGUMENT 1
In QED renormalization procedure, in each Feynman diagram the amplitude is reciprocal to r, where r is covered distance. The paths of the infinite split-off immoral electrons lay in spacetime, so they have a definite shape in our universe. So for the renormalization procedure of QED itself it is important whether the routes traversed in each contribution, in each Feynman diagram, are dragged along in the action of gravity as described in TONE. Or that the traversing is to be taken through flat spacetime, the paths being superposed to all gravitational activity, existing in its own empty flat vacuum where in thought all particles that are not needed, are erased. Mind in TONE the Higgs field absorption is taken from one single field out of the THE FIELD OF ALL POSSIBLE VELOCITIES. All those velocity fields are superpositions relative to each other. The paths of the immoral particles are just extra superpositions next to the fields of all possible velocities. And in each point of spacetime all fields are not curved, except for one, IF there is a Higgs field absorption taking place there. I conclude the immoral particles traverse along straight lines in superposed flat spaces.

ARGUMENT 2
In TONE space starts out flat. Then at point B a coupling takes place between the electron and the photon. Along with absorption from the Higgs field, necessary for the electron to gain mass, a tiny parcel of space is absorbed. Space now is locally curved according to the Einstein equations. The photon is absorbed and is gone now. The electron starts its traversing from point B to the next photon absorption spot E along all possible paths. This takes the time spanned by point of time of B to point of time of E. In the same time the action of gravity does undo the curvature of spacetime until space is flat again. This is assumed to take some time too. So it seems the immoral photons and electrons perform their tasks at the same time that gravitation does. They lay their routes through a spacetime that is continuously involved in the act of gravitation of innumerable other particles, other masses everywhere in the universe. It is not before or after the curve-and-gravitate-back act, but meanwhile. The immoral particles must follow the curves of spacetime.

My intuition says reasoning 1 is the true one. But actual decision cannot be made yet. Because the character of the immorality of the electric charges and photons in QED renormalization is unknown. And I don't have a neat estimation how much time the act of gravity takes, the flattening of spacetime after each Higgs field absorption. I tried to issue the problem at page 5 of NEWTON EINSTEIN GRAVITATION.

When having red the first chapter of TONE, or the storyline NEWTON EINSTEIN GRAVITATION page 3, 4 and 5, one might have concluded that unision of GR and QM is just that space isn't curved after all and QM just performs in flat spactime. But it might be not that simple. Not always.

THE FABRIC OF THE COSMOS 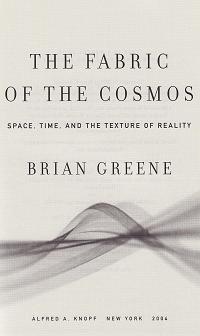 In his book at page 212
Brian Green points out that in unmeasured circumstances each of the potential outcomes embodied in a wavefunction, still vies for realization. So we are still left wondering how one outcome “wins” and where the many other possibilities “go”, when the actual measurement takes place. The familiar Copenhagen interpretation, without all those extra worlds, remains unsatisfactory.