We now use afterward-collected spacetime measurements only, in the rocket frame as well as in the laboratory frame of reference.

In your earthly laboratory you look up to the sky and observes the rocket speeding by. Behind every window you can see a clock. All clocks give same time on the same moment as observed by a rocket passenger. But you on earth see quite something different. Clocks that are approaching you and still have to pass, are running ahead. Clocks still further away run further ahead. Clocks that already have passed and are receding are running behind. Clocks already further away run further behind. The clock just passing by is the only one running precisely equal with your time.

Now we meet the second of the two important phenomena in sr: timedilation. When a clock speeds by, it runs slower. It's not especially the clock; it is time itself that slows down. The higher the velocity of the clock, the slower it runs. The effect becomes significant only when approaching lightspeed, like in our rocket. At complete lightspeed the clock and time itself comes to a standstill.

From this one can infer timedissynchronisation becomes apparent too only when approaching lightspeed.

The clocks in the rocket all run at the same pace and they keep it like that as long as the rocket doesn't change speed. But they all run slower than your laboratory clocks. This timedilation is such that clocks that still have to pass you and thus are running ahead, do run lesser ahead in proportion they are approaching you and at the moment of passage they read precisely the time of your laboratory clock. After passage they are going to run behind and run the more behind in proportion they have receded further.

And so the rainbow-cycle of windows is building up. Clocks that still have to pass run ahead and are illuminated by a color that has yet to come. While clocks already passed by are illuminated by colors that already have been, on the passed-away moments that those running-behind clocks read. Only the clock just passing you runs precisely equal with your clock and in that color the rocket can be considered now to be.

You see the several clocks of the rocket on the several times in the future as well as in the past and you see the clocks in the color they had on the moments they are reading. This means the past as well as the future of the rocket still exists respectively already exists in the now, your now in the laboratory frame. The past of the rocket has gone by but it hasn't disappeared. And the future still has to come but it is already there. This is what you can see from the rocket windows at smaller or larger distance from you, that are visible in the now (your laboratory now) from moments of the respective further or nearer past or future in the rocket frame.

Stated more formally: sr proves slices from past-spaces of the rocket and slices from future-spaces of the rocket (the slices are flat and perpendicular to the direction of motion of the rocket) exist in the same amount as corresponding slices of your own now-space on the same place. From every moment in the future and the past of the rocket there is precise one slice in your now-space (for one single real moment this is a plane without thickness). And your whole now-space is filled precisely with slices from the several past- and future-spaces of the rocket, without gaps between the slices and without overlap. All slices we can divide our now-space in can be assumed to exist in the same amount, that is: they just do exist. I assume this holds too for the complete space of any moment in the past or the future where we have a slice from. And so the fact only one slice is visible from a complete space on one single moment (in fact a small pause of time in case of a slice) in the past or the future, indicates the whole space of that slice does exist now (your now). 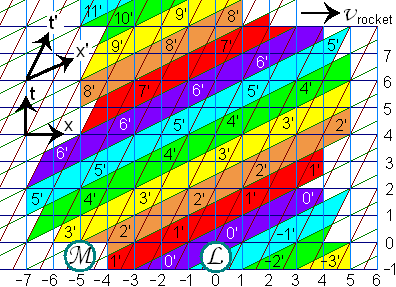 Your laboratory was introduced at a place called L on a moment called 3. Place L lies on coordinate 0 on the x-axis in fig.3. To confirm results you might call in the help of a friendly laboratory. What does a laboratory called M at x = -5 see at the same moment t = 3? (Mind x= - 5 is about 5 lightseconds to the left from x = 0, that is nearly 1.5 million kilometers! That is the result of putting such a huge velocity like the speed of light at an angle of 45 degrees to the x-axis.) Lab L and lab M are in rest relative to each other so they use the same system of rods and clocks. (If L is on earth then M is at a distance of about 4 times from the earth to the moon.) Their afterward collected measurement results are identical. But the rocket slice they are in at moment t=3 is a different one. If the rocket clock right above your head in L will read the same time as your own lab-watch, then the rocket clock of the rocket slice M is in at moment 3 will read a few seconds earlier. (Anyway less than 5 seconds earlier.)

In the course of time M will find that precise few seconds in time-delay will maintain to occur, as long as M as well as the rocket don't change speed. The rest is as usual for M. Rocket clocks to the left will read further rocket future in proportion they are further away. And they read lesser future when times goes by while approaching M. At the moment of passing by they always read that same few seconds ahead. Then they are going to run still lesser ahead and finally run behind and will run further behind in proportion they have receded more to the right.

Is M looking in the rocket's future? Well, that is to say, what you see at M would at L be the rocket's future. But at M this is what is defined as the now. It would take time to transfer this information with lightspeed from M to L and in that time that future rocket moment has passed onto the past of L.

By example, the computer program, or mechanism, or whatever in each rocket lamp makes it light the subsequent colors in the course of subsequent cycles (independent of anything around it) is such that all lamps in the rocket simultaneously agreed on forehand to fail to shine one special second instead of one color. That color in that cycle is replaced then by the black of the lack of light. But it is only to the rocket to know which color at which cycle.

As soon as M sees the lack of light it can try to warn L by a lightspeed signal. But it will arrive too late. The speed of a color exceeds the speed of light, we will say a little bit more about it later.

In your laboratory you cannot observe simultaneously two different slices from one rocket moment. Not with only one system of rods and clocks.

(When we say a rocket moment we always mean the whole 3-dim space of the rocket at that specific moment as observed in the rocket frame.)

Frames of reference, or systems of rods and clocks, at different speed both fill all of space. They move relative to each other, penetrating each other and measuring each other. In every frame an event is measured by the measuring apparatuses attached to the clock of the nearest intersection point of rods. Each system of rods and clocks has its own set of measuring apparatuses at each intersection point. Values for space, time, velocity, acceleration, impulse, energy, electric field, magnetic field and so on, measured in one system transform to another system by the Lorentz transformation formulas.

So far it is only the component along the line of motion of the rocket that counts. The distance component perpendicular to the rocket's velocity had been unimportant. That's why the y-axis and z-axis aren't mentioned so far. Things change when speed is changing direction or when other rocket frames with speed in the y and z directions are involved. All this can be analyzed in sr, although it is seldom easy. 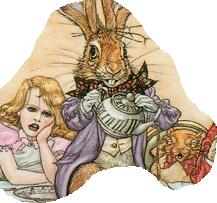 All those frames! This is awful!