An observer in sr is a rigid system of rods and clocks like in fig.1, but then with identical running clocks instead of cubes on the cross points of the rods. An event is archived by the place and time of the nearest clock. The obtained measurement results are collected afterwards and brought to one Central Observer. 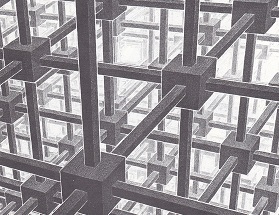 This is the only way to speak unequivocally about an observer. No signal transmission exceeds the speed of light. Signal transmissions that are propagating with the speed of light, except for light of course, are changes in the electric field, changes in the magnetic field and changes in the gravitational field. Transmissions with lower speed are streams of massive particles, sound waves in all type of matter, and so on. It feels natural to take lightspeed-signalling from surrounding events as a base for descriptions of these events (instead of the afterward collecting of measurements made by the system of rods and clocks). Let's follow one example of such a way of doing things.

By example take a group of observers spread over our solar system, lighthours away from each other and all standing still relative to each other and to the distant stars. Well, lets not take the solar system because then the observatories would start to fall to the sun. (They are standing still and so they are not in orbit. So they fall to the sun.) The observers would not remain motionless to each other. Instead take a cloud of hydrogen gas of 1 lightday diameter somewhere out there without turbulence and without a star in it and spread a group of manned observatories over its content. The observatories are at rest with respect to the cloud. A good habit in the environment is to celebrate the birthday of each member by flashing a bright light of some color at the precise moment of birth. Then a sphere of light spreads through the cloud, lighting the hydrogen molecules everywhere they pass, until the sphere reaches the cloud's outer rims and disappears. Some observatories flash only once a year, others are flashing nearly all the time. If each observatory would take the course of events as they see it and doesn't correct for the time the signal needs to travel, then the several observatories would list a quite different running of celebrations in the course of a day. There would be no unambiguous way to describe the events in the cloud of gas in the course of time. So that's why they finally built the system of rods and clocks. And if it hadn't collapsed it's still there.

This doesn't mean one will never see the phenomena described in this storyline in reality and that one would only be able to reconstruct them from measurements collected afterward. But it does mean one have to look to a series of events from the right angle and from an appropriate distance to actually see the special relativistic phenomena with your own eyes.

So far we only considered observers that are standing still with respect to each other. The only velocities considered are the lightspeed signals.