In page 2 of EXPERIMENTS ON THE COLLAPSE OF THE WAVEFUNCTION, at the end of the paragraph Experiment 2 - The inverse square force law we concluded to a new interpretation for the electric force of a charged particle:

The strength of the interaction is inversely proportional to the remaining number of worlds in interference.

Let's try to infer this to color force. We have a baryon in which we focus on one quark Q1 that emits one single gluon GL1 simultaneously in all possible directions. That is, the gluon-emission in any direction is in superposition with the gluon-emissions in all other directions. They don't see each other. In colorshift I found that a baryon or antibaryon can simultaneously emit up to 3 gluons and then restore white again in at least 258 ways - let's take something between 100 and 1000. In quaternions this task has yet

So not only all directions are in superposition, but for any direction the (100) up to (1000) ways to restore white superpose too. Observed from the outside GL1 exists then in a superposition of all its more than (258) sphere-surfaces with radius of 10^-15 meter. Then gluon GL1 meets a second quark Q2 and becomes absorbed. That is, the gluon from the superposition that happens to have precise the right direction to end at Q2, is absorbed. We assume the direction of the absorbed gluon does not allow - and thus is not in superposition with - a passage of the gluon without absorption; Q2 effectively shields off that particular direction. If GL1 passes Q2 it will be in an other direction. Then all gluons - except for the one directed at Q2 - are still going on, on their way as they are to their private color destination, shaping a spherical interference pattern with 1 hole in it. Herein we follow reasoning as in Renninger's negative result experiment, Experiment 3 at page 3 of EXPERIMENTS ON THE COLLAPSE OF THE WAVEFUNCTION.

Then our emitting quark Q1 emits a second gluon GL2 in all directions and amongst them is the one in the precise direction of Q2. Will GL2 hit Q2? In your world? The gluons sent out in all directions are worlds on their own. In one world GL2 is directed precisely to Q2, hits it and becomes absorbed. In all the other worlds Q2 sees the spherical superposition of gluons pass by in all directions, with a hole in it in the direction Q1 - Q2. So in most cases you most likely find yourself back in a world where the gluon-superposition-shield has missed Q2 and has passed by without interacting (because it had a hole in it in the direction of Q2). And this process of missing gluon-shields-with-a-hole-in-it passing by will go on and on until one finally find oneself back in a world where GL2, emitted by Q1, is directed precisely enough at the place of Q2 to hit it and become absorbed. So far the description is pretty analogous to the second last paragraph in Experiment 2 - the inverse square force law.

At each point of the spherical surface of the superposition the number of worlds in interference is something between (500) and (at least 1000). Those are all the ways the 3 quarks of a baryon can emit 3 gluons and then restore white again. When applying the new law, this reduces the strength of the colorforce to practically zero. (large number of worlds in superposition thus small force). Then in the course of the next 10^-23 seconds one after another all necessary reactions in the respective superposed worlds to restore white in the baryon come to completion. Worlds that were different so far become equal and merge again. The number of superposed worlds drops from more than 258 to the 6 possible color-divisions

The new force law then makes the strength of the colorforce to increase within 10^-23 seconds by a factor of approximately 1000 divided by 6. It is not that the colorforce increases in strength with the distance. It is more an increase in time.

This strength then experimentally turned out to be that high that the energy needed to overcome it is much larger than the mass-energy of another 2 new quarks. So before a quark is getting further than 10^-15 meter, a quark-antiquark-pair comes to existence in such a way as to restore white in the actual color-situation.

Color will always be hidden. Quarks will never be free.

Didn't I mistake here? The new force law comes about because in only one possibility out of a large number the next gluon is hitting the second quark. Nearly all possibilities are misses. But in the case of ways to restore white every possibility is a hit. Although every possibility hits in a different way. So here there is a perfect explanation of color-confinement, but the law that is used to get it is not appropriate here.

Something about the interpretation used here.

If there is a choice for a particle to be scattered in another direction and form a measurement, or to pass by without interaction, or to be absorbed, then the world splits in as many worlds as there are choices. We only measure one world. When passing by without interaction, then those worlds we do not measure and thus do not enter, remain in superposition to us.

Suppose we find ourselves back in a possibility where a meson scatters along the baryon while in the baryon a disturbance consisting of a million steps is in progress and we enter it on a moment when only a few thousands steps have been completed. The chain of disturbances is in its own world an ordinary color reaction. So we may expect in our world the disturbance to be interrupted at the moment of measurement and will not be completed. Instead the chain of reactions is bent in the direction of a white colorstate.

As long as an outside observer doesn't know what happened to the meson, a superposition remains intact of the possibility where the meson scatters along the baryon and the evolution of the disturbance is interrupted, and the possibility where the meson passes by without interacting and the typical disturbance of a million steps is completed. But of course decoherence effects soon will make the entire outside world to split too and branch along with the observer as soon as the first observational results of the meson becoming apparent to them.

What we called seeing at this page, is in this website often referred to as experiencing, see pag 2 of DIMENSIONS, paragraph What is experience?) 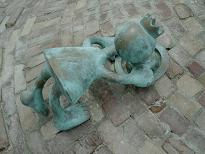