Do the charges of the vacuum react with each other?

To cover the range of QED we only regard here electric interactions between charged particles. For convenience we regard the particles as electrons and positrons. The wavy lines in the Feynman diagrams are photons then.

Do the charges of the vacuum react with each other? We say at first approximation - zero order Feynman diagrams only (no photon couplings) - that the answer is no. When two virtual particles happen to appear in each others neighborhood at overlapping time intervals, they do not see each other. They live in different worlds. Those worlds interfere, as observed by the outside observer, but they do not react with each other.

The picture is in fact two different Feynman diagrams in interference

It is not very surprising particles 1 and 2 do not see each other since the connecting photon between them is missing.

The next contributing possibilities are

Every time you add a photon-electron coupling to a diagram the amplitude of the wavefunction of that diagram diminishes by a factor of nearly 10. That is the value of the coupling constant of the electric force, the photon. Since the virtual photon is always emitted and absorbed, in the diagrams photon-electron couplings appear in pairs. So per added photon the wavefunction of the diagram diminishes in strength by a factor 100.

Every charged particle with antiparticle of same mass and opposite charge, appears positive or negative with like chance in the vacuum. (So yielding a zero electric netforce.) The electron and positron; muon and antimuon; W+ and W-; u-quark and anti-u-quark; proton and antiproton; pion and antipion; kaon and antikaon; and so on.

So there will be no electric netforce in the Feynman diagrams for electric charges in the vacuum. But maybe it is still worthwhile to follow what's happening in detail when one is estimating the electric netforce. Follow the green buttons of the QED storyline.

But there is more than electromagnetism alone in the vacuum. Except for the photon we have the gluon and the W+, W- and Z-null bosons as force mediating particles. All the known particles contribute to the virtual vacuum, however some more than others. Follow the NETFORCE grey buttons. 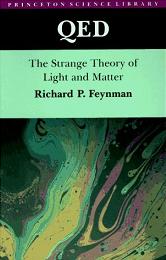 QED
The Strange Theory of Light and Matter

This is the best book I know on QED. All the others are mathematically too complicated,
or not accurate enough.