Let's return to the view sketched in item 15 of page 3 of this storyline. I wonder what it would be for a forward person like me to enter such a dark galaxy. I mean, there is just empty space between us and them and if I cross that space I am there. What happens then?

As pointed out in page 2 of the storyline QUATERNION GRAVITATION, the backward time vacuum is not that different from forward time vacuum. The Higgs field and the gravitational field remain the same. In space we observe no special effects around Dark Matter - supposed Dark Matter - nor around supposed Dark Energy. (The capitals, especially in Dark, are referring to invisible here and not meaning backward time evolving, see my apology at page 2 of EXPANSION OF THE UNIVERSE in the column at the right.) Nothing special is expected to happen at the time border. A free falling object, approaching the time border in empty space, will just continue its straight world line in the spacetime coordinate system, see the scheme below in the paragraph The diamond. But there is more to say about this passage, see page 6 and 7 of this storyline.

I take the CPT theorem to apply here. The CPT theorem states if you have an existable process at our side of the time border and reverse time, invert parity and conjugate charge, the result will for sure be an existable process too, expected to occur at the other side of the time border. Since we conjugated charge too, we take the real particles of the backward time galaxy to consist of antimatter.

Suppose a traveler (not you) would have started at A and travels at near light speed in the direction of X. When it passes the time border at X, what happens then?

According to usual science fiction, taking into account all particles of the traveler and his or her ship soon interact dark (that is: backward time evolving), the traveler reverses time direction and now goes from X to D.

But according to the statement that there is nothing special to see at the time border, one expects a straight line, from A through X to C. But the part C-X evolves in time from C to X, to end there at X at precisely the same state the traveler has when starting from A and arriving at X.

Let's regard first the usual scifi view, travel AXD - but instead we regard travel RST, which is essentially the same kind of travel. We start with the question how many versions of you are there, at the various moments?

1) From moment 1 up to your birth at moment 3 there were no versions of you, of course. Between your birth and your departure at the age of 31, on the travel to the antimatter galaxy, there is only 1 version of you. Between the departure and - but wait.

3) The conversation proceeds in opposite time directions. The end of their message is observed by us as the start of it and the actual start comes later. For sure. No end without a beginning. Especially when the messaging is email-like, every answer accompanied by all previous texts, it would be very nice to start the conversation, seeing their final text coming in with all previous conversations, conclude there is no need to continue and amused you read all things that you have said if you would have said them.

4) It will anyway be tiresome to always get the answer preceding to your question. One always is tempted to leave out the actual asking of the question since the answer is already there.

5) But they are not stupid too, of course. All this applies to them too.

6) Especially there should be no reason why you shouldn't talk to yourself in the time before your depart on travel RST.

8) Well, just like the photons, as you traveled RST, you can travel back, along TUR. So we recapitulate the number of version question now. Before moment 1 there are no versions of you. At moment 1 there is 1 version of you, at the moment of time reversal at U. Between moment 1 and your birth there are 2 versions of you, one going forward in time and one going backward. Between the moment of birth and your depart at the age of 31 there were - but wait, again.

9) Suppose, after having traveled RSTUR, you managed to re-enter your life at the right spot and time when you were 31 years old. But you made a small mismatch, you returned ten minutes before your departure and 100 m aside. You walk the 100 meter towards each other and you - the both of you - shake hands. You talk a little, you wish yourself a good journey, and there you go, the other you, of course. Between the moments of your birth and death there are 3 versions of you all the time, see the picture.

A diamond travel.
You see the moments of your birth and your death.
Moment 3.1 is the moment of departure to the antimatter galaxy.
Moment 3.2 is the return to your place, 10 minutes earlier and 100 meter aside (not on scale).

Travel at near light speed keeps flight endurance within reasonable size (due to relativistic time dilation), but maybe freezing-in is necessary too.

10) Suppose you were a single photon and there are mirrors at R and T, mirroring back you - the photon - to where it came from. When traveling RSTUR, and when you coincide with yourself at R (having same location, direction, wavelength, phase and spin) then the possibility opens the photon has no goal and no source. At a certain moment it just reflects at R and T once and nobody knows it hasn't a source, nor a goal.

11) Suppose you - still a photon - would not precisely coincide with yourself, then there is a second passage at R, at nearly the same moment and place and then heading for (nearly) the same travel RSTUR. And a third, and a fourth. If the photon managed to go around 10^10 times before it is finally absorbed somewhere, all those photons will be there at (nearly) the same moment and place, at the mirror at R and T. And everywhere on the track then, of course.

12) The traveler, you that is, can do like the photon, isn't it? Traveling around and copying itself every time it passes R.

As you can see in the picture, the number of you's is changing all the time. If you happen to carry a small excess of electric charge, or impulse or impulse momentum, then the diamond travels violate conservation laws, nearly all of them, and more than once. They anyway violate the conservation of mass-energy. And cause a lot of timetravel inconsistencies at page 2 of TIMETRAVEL. Well, let's end our view on the usual scifi diamond travels. They are fun to think about but not very realistic. Let's shift to the cross travels like AXC and BXD. 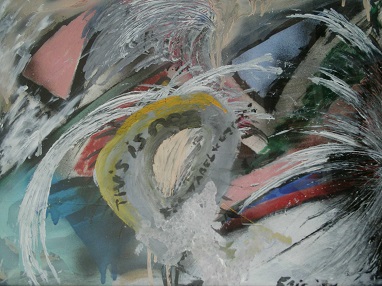