A film play in reversed time direction
- The classical view


Event A := Event B here means Event A becomes Event B by means of time reversal. In this page time reversed means: the film of the event being played backwards. The event before the := always can exist physically with a reasonable chance of occurrence. If the reversed event after the := cannot exist or is very unlikely, the event is indicated by an arrow.

7) Suppose you have a hot chamber and a cold chamber against one another. In both chambers are molecules. The chamber contents are separated, molecules cannot go from one chamber to the other. Heat spreads through the walls. Suppose there is only heat exchange through the partition between the chambers, for convenience suppose the heat loss to the outside (as well as heat coming in from the outside) to be negligible.

First consider the heat in the hot chamber. Assume for the moment all the particles in the cold chamber being at zero temperature (almost), their heat content to be negligible. Observe how the heat of the hot chamber spreads over the other chamber. When both chambers have equal temperature all over, equilibrium (1) is achieved.

Return to initial state. Observe how the heat of the cold chamber spreads at the same time as the heat of the hot chamber does. Both heat spreads are precisely as if the initial heat in the other chamber was absent. Finally the equilibrium heat of (1) + (2) is achieved. Heat is energy and energy is conserved, at each moment the lower heat and the higher heat just sum up.

Heat spreads like the waves on a water surface. The hotter heat as well as the lower heat spread and add. It is as if heat streams from hot to cold.

8) Consider a pond of arbitrary shape, its surface being perfectly still. Then somewhere in the pond during about one minute, a wave generator produces huge waves, but not that huge the waves top over. After the generator has stopped, the water surface can be assumed to host a complex wave pattern. If there is no loss of wave energy by friction or reflection (for convenience we assume so) the pattern will go on evolving for ever.

Suddenly a grid as large as the whole pond, made of square tubes as long as the depth of the pond, is fully put into the water. Now all the water is in the grid. The water in each tube has precisely the height it had in that location of the pond at the moment the grid was put in. The water cannot escape from a tube. The water has stopped waving, its complex wave pattern frozen, stored as it is in the grid. Next day, same time, the grid is suddenly removed in the way it had been placed there. The waves then keep on evolving as if there had been no one-day time delay.

The grid, partly shown, goes through the water in the blue arrow direction.

(It has also been proposed to radar-image film the development of the water surface from above for about 20 minutes, then map out one image at the beginning, bring the surface to standstill by switching ON friction for a while, fill each tube of the grid with precisely enough water in accordance to the map and bring the flat bottom of the grid in touch with the silenced surface of the pond. Then release all tubes simultaneously while removing the grid quickly upward. Film the development of the water surface for 20 minutes and compare the two films. They should show identical course of events.)

This shows the following things.

There is not really an impulse in the propagation of the wave. When the water was stored in the grid, all such impulses were rendered to zero. In fact there is not really a wave. There are only pillars of water side by side, spreading out over each other.

Each pillar of water sags down and spreads out circular over the water around it, as if the other pillars were absent (principle of Huygens). They just spread out over each other. That’s all there is to a wave of water.

Is the spread of one such a pillar time reversible? Imagine a circular pond, its surface being perfectly still. Now in its center a regular series of waves is generated precisely until the first wave reaches the perimeter and then the generator stops. The whole pond now is covered with waves without overlap (no interference). When a wave spreads, its circle becomes larger and its height lowers. When the wave bounces of the perimeter, it reverses direction. The wave’s circle becomes smaller again, the wave crests heighten and when reaching the center they have precisely the energy with which they were created. They could give it all back to the generator. If not, the wave bounces elastically of the generator as if they had just been created and it starts all over again. Without friction or other energy losses, this would last forever.

So the spread of a pillar of water is time reversible? Let us have a closer look at one wave’s cross section. Wave 1, in what direction will it go, left or right? Wave 1 is symmetrical, there is no preferred direction, it cannot choose. It will sag down and split in two waves going in both directions, see 2 and 3. There is no impulse in these two waves, they consist of pillars of water only. If they were symmetric too, they would also split into two waves. Thus they are not symmetric, they can’t be. The slope of the wave in the direction of movement is a little bit steeper than its rear, causing water to fall in the ravine there. The extra water present at the rear prevents water streaming back. This causes the wave to propagate.

9) When things were spread out, to undo this, each piece has to go back along its route. However, usually the spread pieces spread further. Not necessary in smaller pieces; displacement holds as a kind of spread too. But there are so many directions to spread along and only one to reassemble, to undo the spread. Therefore the time reversed version of a spread usually shows an unlikely row of events. Far more unlikely (but not impossible) than its forward time counterpart. Everything that spreads, usually has a time arrow. Emitted light and sound, dust, waves of water, shock waves. All time arrows.

If the number of arrangements of A

Similar arrangements of B

Brian Green in his book The fabric of the cosmos points out that this means that an unlikely state like the world around you, most of the time is supposed to be preceded by a more unlikely state, which on its turn is preceded by a still more unlikely state, and so on - would you call this an explanation? Until in the uttermost distant past you have the unlikeliest state possible, and how likely is that to be, ever. Well, as said, every system of finite energy in a finite volume will some fine day return arbitrary close to its original state, if you only wait long enough. So all acquired entropy increase will some day spontaneously be undone to an arbitrary level of accuracy. Some day. 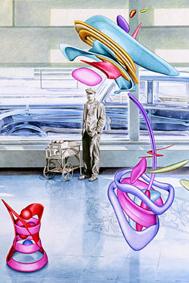 
Each A and B are identical volumes of water. The most upper A is a wave on the surface of the ocean. Normally each pair of volumes A and B next to each other exert identical force on each other, in doing so keeping each other stable at the place. But in this case each volume A exerts the wave’s weight as extra pressure onto the water volume B at the same depth. This tends to shove the pillar of B’s to the left and distorts the neat water pillar structure onto the very bottom of the ocean.

When water becomes shallow, waves slow down, come closer together and heighten. Compare the highway when a traffic jam is building up. When cars further in the row slow down, the cars behind approach each other and when bumper to bumper the wave does something cars cannot do: they stack upon each other; the wave heightens.