The memory of a criminal or supposed terrorist will be copied to a volunteer and then the volunteer is asked, instead of the supposed criminal. But criminals will (try to) erase the memory of their crime. We know too little from the brain to judge whether full erasure is feasible. They'll even try to install new courses of events, which is still more difficult to make it look real. Especially when other watching people are involved.

You were abducted by a group of criminals. They don't care about that you see them, they will erase all memory to this whole event. They place the memory in your brain that you have committed this or that crime, e.g. murdering a specific person and when you wake up the next morning you are convinced you did it.

Staying on your own is dangerous, far too dangerous I am afraid. One needs the constant surveillance of one's own group to prevent this kind of things to happen.

There will be loners, people who do not live with others. Everybody know them, they will have a kind of mythological status. And because they are known and because they are few, they will be protected. But people in large numbers living without knowing each other, like people do now, is in fact no longer possible. It is much too dangerous.

When I got lesser worried about the adults, I got more worried about the children. Nowadays, children in fact are the property of their parents. In a lot of countries the parents have full governance over the child. In times to come this will not change too much, I guess. So who protects the children from misuse by their parents? The group members? And when the whole group shows that kind of habits?

The only thing I can come up with, is the children will not be child forever. Once they became adult they will take measures. Remove the abuse memory from their minds, find adults practicing the misuse and bring them to justice, make sure they wouldn't do this to their own children. But it is late, remote and not sure enough.

Invisible to the human eye, innumerable strings of nanorobots drift through the air. When they touch the hair, the skin or anything, they stick and silently crawl inside. They settle in the brain, waiting for the night to come. And when the person is asleep, they first make sure to keep it asleep as long as needed. They start to replace brain parts. And when the morning dawns, the entire population has been taken over. A kind of fifth amendment (see previous page) will be no luxury.

Next page treats open end axons connected by transmitter boxes. The picture sketched at this page is not yet updated to that.

Yes, there will be crime 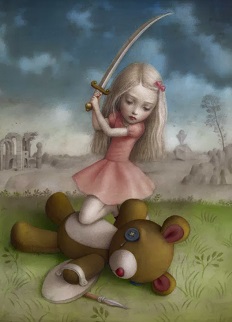