This is the summary of a number of pages of the storyline NET FORCES IN QCD. That storyline is mainly about QCD in the colorshift approach, from before 2012. Since then I developed the basis of what can be called QQD, Quantum Quaternion Dynamics, where colors are replaced by the imaginary quaternion units, and the colorshift is abandoned now, it is a previous attempt. From the first half of the QQD storyline is regularly referred to this summary.

As colorcharges we choose red

(the dark blue). As anticolors we take yellow

A red color moves from a position to another position. In the upperleft
corner is the colorcircle. The seventh color, white, is in the center.

The three primary colors add up to colorless white.

The three colors and the group of the three anticolors are equivalent. They are both equally fundamental. In fact each color is equivalent to any of the five others. Each color is as fundamental as each of the others.

which are the anticolors expressed in terms of colors only.

The three secondary colors, the anticolors, add up to white too.

which are the colors expressed in terms of anticolors only.

So every color equals the sum of its two direct neighbours in the colorcircle.

Quarks have color and antiquarks have anticolor, there seems to be no other way.

Everything-overwhelming seems the urge for colorneutrality. If a reaction violates this rule the reaction will not take place, or will be followed immediately by another reaction that restores white color-state.


Page 2: The colorshift of gluons

We have an antibaryon consisting of one magenta quark, one cyan quark and a yellow one (yellow not shown). The shown gluon changes the color magenta of the emitting quark into cyan by shifting the color along the arc of the colorcircle. The magenta is shifted over an angle of -2/6 of a full turn. Minus sign indicates clockwise direction, plus sign indicates anticlockwise direction. The gluon itself then consists of the opposite shift +2/6 from cyan to magenta as being the shift that is removed from the quark.

It is as if the gluon takes away the color of the emitting quark in its upper half and then a color-anticolor-pair of its destination appears, a so-called correlated pair of colors cyan-red. The anticolor cyan is left behind in return for the anticolor magenta that is taken away and the color red is dragged along in the lower half of the gluon.

Then the receiving cyan quark absorbs the gluon, it absorbs the shift of +2/6 and changes into magenta. The effect is an exchange of colors between the quarks. As if the magenta goes from quark 1 to quark 2 and the cyan going from quark 2 to quark 1. As if the anticolor goes backwards in time.

A more time-symmetric representation of fig. 2 is:

Translating to time-symmetric representation: the upper half of the gluon is left the same, the lower half is replaced by its anticolor.

The last line gives the color-shift represented by the gluon. The quark that has emitted this gluon experiences a shift of color that is given by the opposite. The +2/6 m-to-c gluon

(magenta-to-cyan gluon, just another gluon-notation, not used any further) makes the magenta quark to shift over -2/6 to cyan.

Up until now we have had the 3 colorshifts +2/6, 0, -2/6 times a full turn along the colorcircle. Between the 6 colors in the colorcircle 3 other colorshifts are possible. First there is colorshift +3/6 (or -3/6, which is the same) that occurs in mesons.

There is little point to the emission of 1 colorshift +1/6 or -1/6 gluon in mesons or hadrons. The endresult will by no means be colorneutral.

When both quarks of a meson emit a -1/6-shift gluon, the meson left behind is colorneutral.

But where go the two -1/6 gluons? When they combine to form a -2/6 gluon then where does this go? The colors of the resulting gluon are not clear. These are the 6 shift -2/6 gluons:

One of them have to be the fitting one - when it are more than one these possibilities will go in superposition. But this reaction thus will not occur since the result isn't colorneutral. There is a net colorshift of -2/6.

Could there be help from abroad? One can imagine a neighbouring meson supplies at the same moment a +2/6

along a similar route. Our net shift -2/6 gluon can combine then with the shift +2/6 gluon to a white glueball. But the neighbour has to deliver the gluon at a sufficiently nearby moment and they both have to cross half their mutual distance to couple. This will not happen easily. Besides, two spin-1 particles couple less easy than three, see page 7 of NET FORCES IN QCD.

(Gluons have spin 1, it are bosons. If the hadrons of a nucleus could be excited and an initiating

enters the nucleus with precisely the right speed, could there arise a lasereffect of

's approach each other and subsequently form glueballs?)

Another scenario arises. The 3 quarks of one hadron each emit a -1/6 gluon that combine to a -3/6 mesonic gluon. A neighbouring hadron produces a +3/6 mesonic gluon along the same route. The 2 mesonic gluons combine to a white glueball. And the two hadrons now each have 3 anticolors instead of colors (but their electric charge remained the same). So that is possible and if not for the rarity of the process it would regularly happen.

So the colorshifts +1/6 and -1/6 do contribute to QCD. But when they are designated as vacuum particles this reaction cannot occur no more.

Concluding, most of the diagrams shown so far (I mean, in the pages 1, 2 and 3 of the storyline NET FORCES IN QCD) do not have a counterpart in +1/6 and -1/6 colorshifts because the result is not colorneutral. Colorshift +2/6 and -2/6 are hadronic shifts. Colorshift +3/6 is the mesonic shift. The colorshifts +1/6 and -1/6 transform a color into an anticolor, but not the anticolor of the color but one of the two other anticolors. The border between color and anticolor is thin. It is merely the reactions with colorshift +1/6 and -1/6 are seldom colorneutral, otherwise there would be far more conversion between colors and anticolors.


Page 8, below: Do larger numbers of N count?

(...) only the colorshifts counts. Taken as a fraction of a full turn along the colorcircle holds for 2 gluons meeting:

These are angles, their cornerpoints taken in the white center of the colorcircle. In fact it is just as if the gluons are complex numbers of length one. When coupling, the gluons multiply, their length remaining 1 x 1 = 1, and their arguments adding, as complex numbers do.

The angle a, or argument, is quantized:

= (complex number of length one) times (its conjugate)

The graviton is 1. The vacuum is not nothing, it is 1. And another 1. Are these the mathematical 1? And don't forget the

Mark the resemblance with the value of g, the strong coupling constant. Is g somehow the graviton/Higgs boson? It is worth trying to set g = 1. Precisely 1.

When applied twice, a shift of a color over an angle of 1/6 of a full turn will yield a shift of 2/6. When a shift of 1/6 cost energy, then twice that shift will cost twice the energy.

Applying a full turn along the color circle is like circumventing a real lake by walking. When having circumvented the lake for 1/3 of its contour, you arrive at a point. When circumventing the other direction for the other 2/3 of the contour you end up at the same spot, having applied twice the energy you needed for the 1/3 tour. Is it the same for gluons? Applying a colorshift of 1/3 ends up at the same color state as the application of a colorshift -2/3 times a full turn along the colorcircle. If so then the -2/3 colorshift cost twice the energy of the 1/3 colorshift.

Maybe every gluon just costs the same amount of energy. Processes with least amount of gluon reactions will cost least energy then. 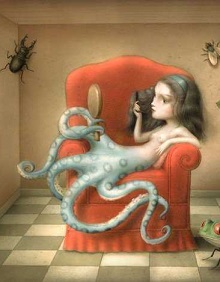 Today I am going to visit my girlfriend 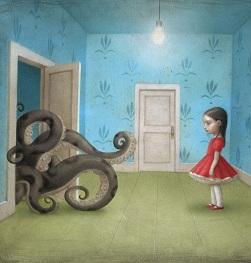